sib date and other random updates 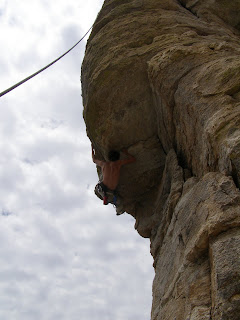 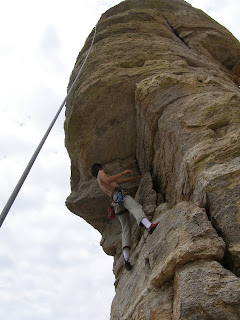 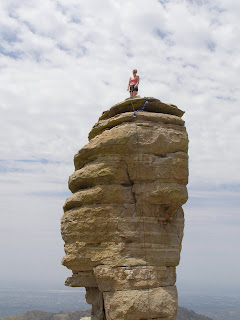 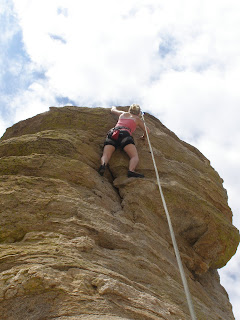 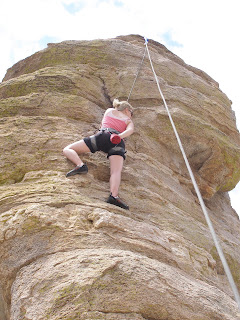 I am officially fried. I didn't put sunscreen on, thinking we'd be in the shade (it was morning) as during all other climbs. Not so...and it was the hottest of our climbs yet. bahg! I got super burned. My back is, as we speak, smothered in aloe vera gell trying to cool off. ouch. but it was lots of fun. I mastered my first 5.7. The 5.8's are kicking my butt. I made it halfway up again but couldn't do it. My arms have already been sore from work (carring heavy trays, etc.) and were super shaky. It was funny but frustrating because I couldn't hang on.I slipped and fell but Luke caught me. and i made it up! The view was spectacular. And, as Luke says, the burning feeling after the fact is worth it. I agree. I have always liked that feeling. But ON the rock, its rather frightening.

Some random women got out of their car and were taking pictures of us. It was mildly creepy. Who wants random pictures of some girl climbing a rock-face? Luke said it was because I was "sweet ass" which made me laugh a lot.

I love spending time with him.

he's amazing. He climbed the 5.10 like a little spider--right up and over the large over-hang. crazy.

tomorrow i have the day off. I'll be making lumenarias for the farmer's market on saturday.

oh! My second shift at work was cancelled yesterday. Nice. So I went on a viva burrito run with anne marie and jordan at midnight...for old times' sake :) It was a blast. We hung out until 2am. yeah, I never stay up that late anymore. But it was well worth it. I've missed hanging out with them!

alright. i'm super sleepy. I think I'm going to go crawl into bed with a good book. I am currently reading "Old Men at Midnight" by Chaim Potok as well as "The Four Loves" by CS Lewis.