i have the coolest brother

Luke and Dad recently spent a few days on the Salt River. Rain interrupted the trip but they still had some fun adventures. Luke emailed me the story and I thought I'd share--its a good one :)
---
So first off we went to the Salt river planning on doing a three day backcountry float, turns out it was raining. And you know what its like when it rains in AZ, so we (mainly dads decision, but hes getting old and i didnt want to hoof his hypothermic body out on my back)decided to just do the day run cause he doesnt want to be stuck in an open canoe on wild whitewater. When we got back we looked at the water gauge online and it went from the 800 cubic feel per second we were expecting and jumped up to 3,000. I need you dan! That would have been pretty wicked paddling in a kayak.
So we head to fossil creek that night and get there with an hour of sunlight left, so i ran the mile hike along the creek up to the falls. It had stopped raining but the creek was flooding like mad, my heart was happy. We woke up the next morning and the creek had receded by about half as much water, my heart hurt. It was still decent paddling, but that extra water would have boosted it to excellent.. guess you cant win em all. My first run .. its the first picture attachment.. theres another little drop bellow that you cant see, the water pushes you between a boulder in the river on the right and a cliff on the left. I got launched into the cliff and rolled under and up.. and my paddle blade was snapped in half (yaaay for plastic carlisle paddles!). lame. So i ran and got my backup one.
Now, turns out this backup paddle is the one Owen used when i took him down the Salt river 4 years ago. He snapped the shaft in half right in the middle during one of his hundreds of swims. He assured me he would fix, and he did. He slid a metal pipe in either end of the paddle shaft and glued it.. ??? Metal doesn't float Owen! So i took it apart and did the same thing with PVC pipe (plastic). Now i have by sketchy backup paddle and i'm heading straight for this 7 foot vertical drop. i'm all jacked up cause in the place where my line was the boil line was waaay far back and i need to nail the boof. (the second picture attached, my lines river left.) when im about 10 ft from the lip of this thing my paddle snapped in half. bummer. so i paddled, C1 style, to the river right side of the drop and it was a piece of cake.
I came here for the 20 footer and was not about to bail just because i didn't have a paddle. So i carved a stick and jammed it up in either end of the paddle shaft, figured all i needed was something that could get me to the lip of the falls then let gravity work its magic. the third picture is my work of art.
We booked it to the falls, skipping several 5 to 8 foot drops along the way, and i ran it no problems. Its a super friendly water fall, simply go over the left side not the right and your groovy, you could land backwards, upside down, sideways and it might hurt but you'd survive. On impact half of my paddle popped off the stick.. so i rolled up with one half.. and watched the other sink. I ran the falls once and called it quits.. i figured God was against me on that trip and didn't want to push my luck. There's a video of the falls on fbook, i have videos of the rest of the runs, but they're just stupid.
Thats my story.
---

The drops look tiny because Luke's not in the picture. But they are about 7 ft. 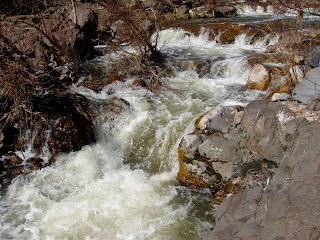 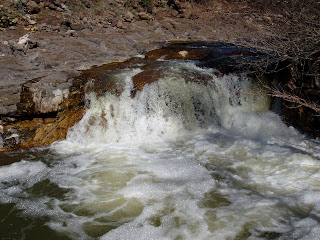 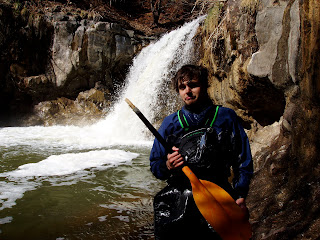