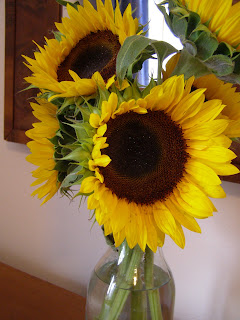 life is full of interesting twists and turns. its full of happiness and disappointment. It's full of hello's and goodbye's. college is interesting. each new semester is so different. i never have THAT many expectations, but there are a few. but everything is always different. no semester is alike. i wonder what this one will be like...
i'm in a funny place. my heart feels richly "full" but also sad. I am so deeply joyful and thankful but a good deal sorrowful. yes, its possible for joy and sorrow to meet and mix. hmmm.

yesterday was a beautiful day. you know those days that make you so happy to be alive? so much so that you almost feel guilty or shameful for not *always* feeling that way? i had one of those days...
i got up at 3:45am to leave for work by 4:30. I worked with Freddy and Karen and Sharon and Lemar worked the party next to ours. It was a full morning. Dennis (the pastry chef) gave me my very own "going away" pastry. I will miss him.
I said goodbye to Sharon because we didn't know if our schedule's would overlap again. It was weird to say goodbye. I like her so much. A single mom working 70 hours a week between two jobs to provide for her two, high school aged kids. She's been through a lot. I found out yesterday that her first husband died. She's divorced now--rough story. She works so hard. I suppose saying goodbye to her put me in one of those "moods." i get the mood a lot...its the "i am SO going to miss these people" moods, and "will I ever get to see them again or spend extended amounts of time with them?" there's never really an answer...

after work I came home and took a nap. I *love* naps when I am completely exhausted. they are sweet :)

after my nap i drove across town to hannah's starbucks. i love driving on River. It's such a fun road. It was an overcast afternoon which gave the day a "lazy summer day" feel. loved it.

I sat at starbucks sipping an iced green tea. I read and journaled and was distracted by all the people. I love to people watch. I think i creep people out because I stare too much. but i can't help it. and i was overwhelmed by what a beautiful world we live in--with so many DIFFERENT people. pretty incredible. I saw a man across the room from me wearing scrubs and thought "i would like to wear scrubs someday."

and i was reminded again that I simply love henri nouwen. man oh man. the guy says things just how I want to say them but can't seem to. when I read i feel like I am always saying "yes!" or "i know EXACTLY what you mean!" or just "MmHmm..." So I read Nouwen's Genesee Diary. and he wrote something that was so exactly what I thought/felt that I wanted to stand up and shout and dance and i don't know what else...get really super excited :) (also, I think I want to secretly join a monastery. not a nunnery. I think they would get on my nerves. i want to be with the monks. hannah said I could just shave my head and sneak in. I'm not sure but maybe its worth a shot someday :)).

Here's what I read (he's quoting Merton):
"In Louisville, at the corner of Fourth and Walnut, in the center of the shopping district, I was suddenly overwhelmed with the realization that I loved all those people, that they were mine and I theirs, that we could not be alien to one another even though we were total strangers...though 'out of the world' [monks] are in the same world as everybody else, the world of the bomb, the world of race hatred, the world of technology, the world of mass media, big business, revolution and all the rest. We take a different attitude to all these things, for we belong to God. Yet so does everybody else belong to God. We just happen to be conscious of it and make a profession out of this consciousness. But does that entitle us to consider ourselves different, or even better, than others? The whole idea is preposterous...
I have the immense joy of being a man, a member of a race in which God himself became incarnate. As if the sorrows and stupidities of the human condition could overwhelm me, now I realize what we all are. And if only everybody could realize this! But it cannot be explained. THERE IS NO WAY OF TELLING PEOPLE THAT THEY ARE ALL WALKING AROUND SHINING LIKE THE SUN."

Nouwen quotes him a bit further but then adds on his own: "No, 'there is no way of telling people that they are all walking around shining like the sun' but God's glory in you can bring out God's glory in the other when you have become more conscious of this shared gift. God speaks to God, Spirit to Spirit, Love to Love. It is all a gift, it is all grace."

I think i've learned something of this over the summer. I've seen how the enemy steals, kills, and destroys. but I have seen how Christ gives rich LIFE. sometimes the life comes "quieter" than the stealing and killing, which might seem like a contradiction and might confuse us. But faith is believing in things unseen--things hoped for. Faith is listening to the wisper even if we want (or expect) loud claps of thunder.

So i left starbucks. I went to Trader Joe's and breathed deeply (for I SO love the smell). I bought a bouquet of fresh sunflowers. They are beautiful and are brightening up my room. I drove home in the dim evening summer sun listening to iron and wine. sigh. i praise God for these lazy summer days. they have been amazing.

I have one more morning of work left (next tuesday). I worked this morning and felt, again, deeply sad. Rick said "when is your last day? We have to celebrate your future! Do you drink?" haha. I love Rick. he's been a HUGE encouragement. Everyone has. Luis said he and Freddy are going to throw me in the pool next week after work (tradition when someone leaves). I said "no way, you will NOT!" but they just laughed.

I love these people...these people who are shining like the sun but don't even know it.
Posted by Andrea at 2:16 PM